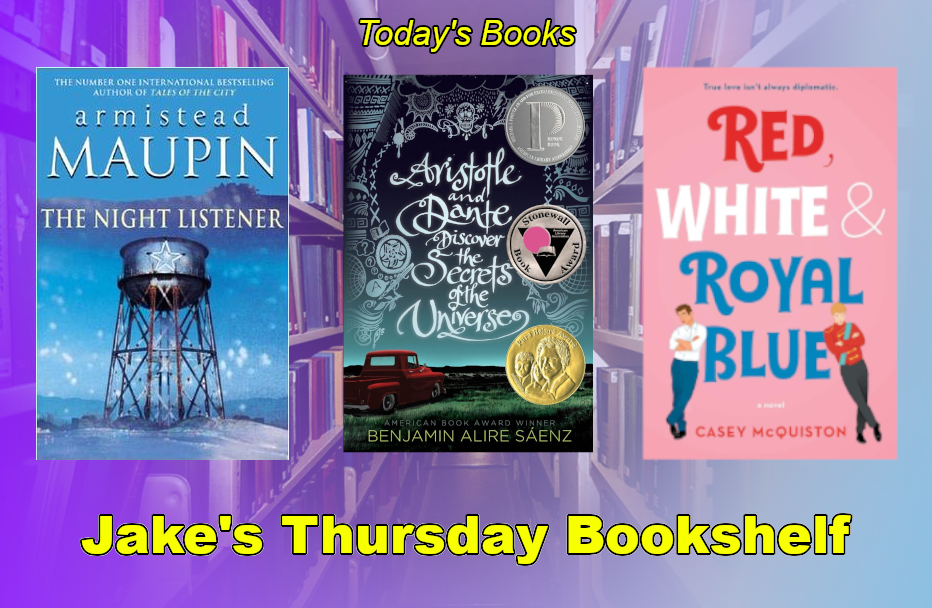 Hope everyone is having a good week. I have some more books to talk about! You don't know how hard I've had to hold my tongue this week, I didn't want to overcrowd the board with book talk. Once a week I've told myself is enough. I look forward to hearing if you've read these books or if any of them interest you!

The Night Listener by Armistead Maupin

The Night Listener is a book about Armistead Maupin himself. It is a book about the fuzzy line between fiction, fantasy, and truth. The plot centers around themes of found family and fatherhood. The story is as follows: Gabriel Noone is a successful author and NPR radio host who has had a breakdown after the love of his life Jess decided to leave him.

Jess was dying of AIDS but with new medicine has found a new lease on life and realized he doesn't want to spend forever with Gabriel. oof! Gabriel is now on his own and like I said, his life is unraveling. He doesn't know what to do with himself. Jess was everything to him and he just up and left...

Enter Peter. Peter is Gabriel's biggest fan. He listens to Gabriel's radio show every night in his bedroom and pretends that the nice voice on the radio is speaking to him alone. Peter has written a book about the horrific childhood sexual abuse he experienced at the hands of his evil pedophile parents and the publisher of the book has asked Gabriel to give a blurb for Peter's book. Afterall, it'd mean a lot to the kid for his role model to do the blurb for his book.

Peter, unfortunately, is also dying of AIDS. oof! The story was really, really sad as you can already imagine.

Gabriel starts talking with Peter and they become really good friends. Gabriel tells Peter everything. About the relationship problems he is having with Jess, about his own father whom he calls Pap and the hangups the two have with one another, and about all his dead friends who lost their battle with AIDS. oof! The tears they must flow!

Gabriel tells a story to Peter in here about his friend Eddie who loved comic books and was surrounded by train sets and childhood toys when he died...it broke me. I'm crying just remembering it. The pain Maupin conjurs up is very real. The picture of a man in mid-life crisis whose best days are behind him (and were they even that good?) is very fully on display in the book.

I couldn't stop thinking about an old joke I once heard while reading it that every writer seems to have Daddy issues and that seems to very much be the case with Maupin's work. The book really isn't about Pete all that much. It focuses on Gabriel's relationship with Pap, his endearingly racist father. Talk about two words that don't go together these days, but Maupin makes it work. Pap is a good ole boy from Charleston's high society. He is hilarious and very outspoken. A banker by trade who is disappointed that his son has become an author and is gay.

Pap's father committed suicide when he was a kid in the 1930s. Gabriel just wants his father's approval and as his father gets up there in years he wonders if he'll ever get it. Especially with the proof of his happy ending going up in smoke with Jess.

Meanwhile Peter starts to call Gabriel Dad and also might not be real. Peter could be a hoax!

Thats as much as I'll say on this book. It is good. Really good. It maybe me sob and definitely warrants a pallet cleanser as a follow up.

Aristotle and Dante Discover the Secrets of the Universe by Benjamin Alire Saenz.

Wow, what a book. If you just read one of these books I'm talking about today pick this one up. It one a shit ton of LGBT youth awards for good reason. It is really, really good. The story is super cute, there is a low level of teenage angst, and it has a diverse non-stereotypical cast of characters.

Aristotle and Dante are two boys who meet when they're fifteen years old. Dante teaches Ari how to swim at the local park. Ari is a loner who doesn't have many friends and Dante is...well he is Dante!

It is love at first sight even though Ari doesn't know it until the end of the novel. The story is just so so absolutely cute and precious.

Ari's voice is really interesting. He is a smart kid always over thinking things. He has a sadness, a weight that he carries with him. It almost comes across as neurological and I wonder if Saenz will explore that in the next book. Eitherway this book is so cute. It is so sweet. It is so good. I love, love, love these two sweet kids! They deserve the moon!

It left me feeling a bit sad because I spent ten bucks on it and I read it too quickly. I want to see more of these sweet kids and am glad that we definitely will when the sequel drops this October! It did leave me feeling a bit morose for a childhood I never had and never will have. Missed opportunities, c'est la vie.

Ari and Dante have something that is very fairy tale. I wonder if the sequel will maintain the same tone of sweet optimism? It is supposed to be darker and has been compared in some of the blurbs to Adam Silvera's works. It worries me a bit! I don't want Saenz to hurt our sweet boys!

This one is possibly a skip on the list. It reads like a watpad fanfiction or something you can find from an amateur on GayAuthors for free. Though there are moments of greatness in it.

Basically the premise is that our protagonist Alex Diaz is the first son of the united states. He is twenty-one years old and going to Georgetown University. He wants to follow in his father and mother's footsteps. His father is a Senator for California and his mother is obviously the President.

At a royal wedding Alex accidentally causes an international incident when he gets too drunk, gets into an argument with an English Prince, and falls into a table causing several thousand dollars worth of damages.

In order to make things right, Alex has to go and do several photo-ops with the Prince who he hates. You can see where this is going and it is...alright.

The problem I have with it really is the prose. It reads like a teenage girl wrote it who spent a lot of time on Tumblr. I love contemporary politics but I don't need a thousand references to real life political figures. And honestly, if its trying to be a gay version of the West Wing or Madam Secretary she should have used her own setting and characters instead of relying on contemporary figures that date the book.

There are moments of greatness in it though. I think the characterization between Henry (the English Prince) and Alex is pretty good. Henry has a love of the classics and history. He and Alex talk about it a lot. The same kinds of things I've been interested in lately: Alexander the Great, Plato's Symposium, etc.

Henry in the book even mentions something I didn't know which I found fascinating: King James I of England had a First Gentleman.

A French Satirist named Théophile de Viau in the 1600s wrote a poem about it!


Apollo with his songs
Debauched the young Hyacinthus,
If Corridon fucks Amyntas,
Caesar loved only boys.

One man fucks the Baron of Bellegarde*
Another fucks the Count / Earl of Tonnerre.
And this learned King of England,**
Did he not fuck the Duke of Buckingham?***

I have neither the status nor the rank
Which makes a Marquis of a wench.
And yet, you know I could****
As well as any Prince of royal blood.


This story seems almost too good to be true and I'd like to see a Snopes on it! Either way Henry is obsessed with it because the royals won't let him be gay.

This is where the book shines, whenever it stops trying to be funny and actually explores ideas. Whenever it does try to be funny though, it isn't and ends up just coming across as lolrandom. Like a scene early on where Alex brings Turkeys into his bedroom so as to not waste taxpayer dollars before the Thanksgiving Pardon. CRINGE!

The characters are good. I think the book would be better if Mcquiston rewrote it one more time. It is close to really good.

It reads like a cheap rom-com. It isn't bad. It was sold to me as "As good as Dante and Aristotle Discover the Secrets of the Universe" though and THAT IT IS NOT.

Seriously, go out and buy Aristotle and Dante if you haven't already read it. It is so good. They are so cute.

Book Ratings for Today: Night Listener gets 5 Stars; Aristotle and Dante gets 6 Stars (of 5); Red, White, Royal Blue gets 3 Stars.

Up Next: Possibly The House in the Cerulean Sea because Mike recommended it so highly. Possibly More Happy than Not because Mike recommended Silvera to me and he is such a good author. I've also looked at Silvera's History is All You Left Me but oof! I don't know if I'm ready for Silvera's darkness. That dude has some demons that he uses his novels to explore. These are exceptionally depressing books and pricey to boot! But I really do think next paycheck I'm probably checking out one of these two by Silvera. I know More Happy than Not has a revised ending which makes things happier for our protagonist so I might go with that one. (MHTN is about a boy who wants to erase his memories to forget he is gay and has attempted suicide in the past. HIAYL is about the death of the protagonist's ex-boyfriend who he always hoped would come back to him. AHHHH!)

PS Comsie - Hope you don't mind but I think I'd rather talk to you all about books rather than submit to the magazine.

pps - please tell me your thoughts on books or any recommendations you have for me. :) :)